Truth be told, I've ALWAYS been a car guy, but my passion for riding is far greater than any joy one can get from driving a car.  But, after 40 years of working, a couple of really good commission checks and an understanding wife, I just bought a very special car.

After a particularly hot summer ride, fraught with too many stops and too much traffic, Ms. Rocket declared that her love of riding was over. This wasn't the first time she thought she was through, so I wasn't particularly upset, just accepting of her decision.  I told her that we would put her gently used bike up for sale in the spring, and not to worry, I would handle it all.  Her next question caught me off guard though.

Folks, I tried, I really tried.  Fortunately, I had a partner in crime, good friend and riding buddy Kenny B., whose faithful H-D Road King had seen too many roads.  His bike was up for sale and he was ready to buy new.  So we shopped.  We looked at EVERYTHING, from every manufacturer.  For 4 weeks, every chance we got, we looked, rode and touched everything on the market.  Some were good, some not so.  We really like what Triumph has been doing, with their stylish, smaller bikes. Ken is no giant and, as he enters the later stage of his riding career, he knew a smaller bike was his answer.  Me, I seemed to be going in the wrong direction.

I rode bigger and bigger bikes, in the hopes of finding 2-wheeled marital bliss.  Finally, after our second test ride two-up, on a behemoth BMW Mottarad K1600 GT, perhaps the zenith of all things motorcycle touring, I announced "Not doing it".  See, it is easy to put  myself in harm's way, ride like an idiot, and suppress my fears of my wife getting hurt riding her own bike.  It is quite another for me to take on all of the responsibility for her safety, as we get older and more brittle.  With what BMW is asking for that lovely appliance, I thought, "Hell, I can get a new Miata for that!" 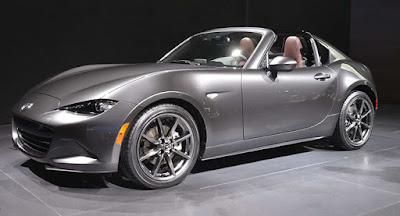 Last fall, Ms. Rocket and I took a test drive in a new 2016 MX-5 Miata.  We loved it.  It has motorcycle-like acceleration, great, quick handling and a sporty exhaust note.  I knew I wanted a loaded Grand Tour, with all the buttons and bells, but wasn't in any hurry to make a purchase, and leave my daily driver out in the snow and ice.  The salesman was in tune with me, got it, and didn't push.  Who the hell buys a new Miata at the end of the year?

But he stayed in touch, as they do, with emails about all the other cars I don't give a rat's ass about.  Mazda Vans and 3's.  Cute, but not for me. And then one day an email mentioned a special 2017 car they had, a Launch Edition MX-5 RF.  If you don't know this car, it is the Retractable Fastback, new for 2017.  While Mazda had success with the hardtop convertible in the past, this was a new design, revolutionary really, that caught the automotive press unprepared and clamoring.

The deal with the Launch Edition (according to the Mazda people), you had to have owned at least 2 Miatas in order to qualify for ordering 1 of 1,000 units being delivered to the US Market.  How was this dealer selling one at all?  They sold out in like 14 minutes.

Seems that these cars arrived early, in the dead of winter and, like so many of us, there was no room at the inn, for this particular buyer.  We traveled an hour to see it in person and fell in love.  The cost was more for the hardtop, there was no wiggle room, and I knew that this was a serendipitous moment.  After thinking about it for a whole 4 hours, we pulled the trigger.

So, I have another toy, one that we can romance into the sunset together in.  Our weekends will soon be booked with romantic getaways, as far down some twisty roads as we can get.  Perhaps her most endearing quality, after her warm heart, is her willingness for a good road trip. My traveling companion now can ride in comfort,  safely wrapped in terracotta-colored Napa leather.

If you see a crusty old fart, driving down the road with a gal who looks too pretty for him, say hello to us.  Or, if you prefer, just drop us... 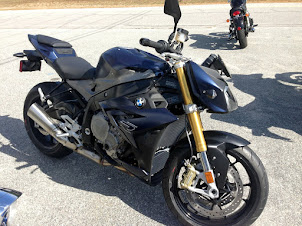